As an aviator, it is truly unique and a must see that very few do. Every year in the middle of nowhere a temporary airport is created to accommodate anyone who wants to fly into this ‘counter-cultural experience’. The Black Rock Airport appears like a wormhole in spacetime for a couple of weeks on a dry lake somewhere in Nevada.

The first time I saw Burning Man I was as a novice jet pilot flying from Southern California to Idaho from thirty-six thousand feet. For an event that was meant to embrace anarchy and the individual, it appeared as another world collective controlled by a singular brain who had a love of geometry… I was intrigued! 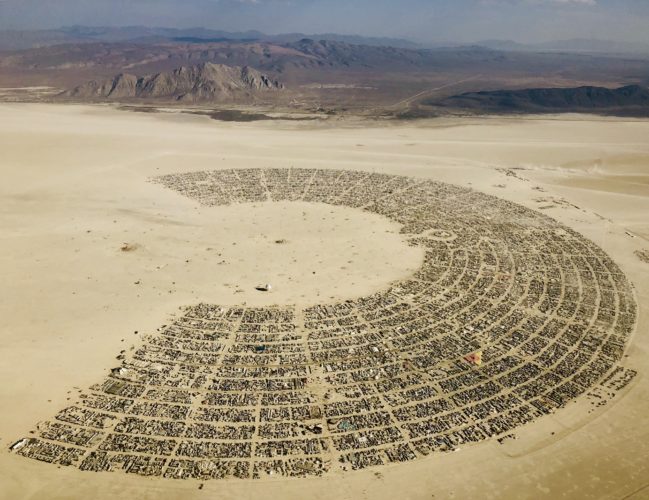 So when the opportunity came to fly a DA62 into Burning Man, I jumped at it. A few of our renter clients were going to take two planes to the event so I suggested they take the DA62 instead and I would offer my services as a safety pilot.

Even with the added weight of me and my stuff for a couple of days, the DA62’s useful load and miserly fuel consumption allowed the mission to be accomplished in one plane as opposed to two. The redundancy afforded by the second engine, combined with its large tires and trailing link gear, was perfect for getting over the Sierras and landing on a dry lakebed.

Unless you are an approved charter, every occupant must have a ticket to the event even if you are dropping friends off – brilliant – now I legislatively had to have the full experience.

To be allowed to fly to Burning Man, the PIC has to undertake an online course explaining the procedures for arriving, parking and the hazards associated with operating in and out of the Playa. At the end of the course, you are provided with an alphanumeric code specific to your tail number.

Flying into the event is pretty straight forward as long as you review the instructions associated with the aforementioned course. On initial contact with the airport, you provide the code given to you at the end of the course and they, in turn, give you permission to land. The only other place I have heard of that happening is flying into Israel.

You can choose to fly into the arrival pattern and land or a better option for newbies is to fly around the burning man complex, to get a great view of the Borg collective at work, and from there you enter the pattern to land. The main hazard associated with landing in the Playa is the ability of the visibility to suddenly deteriorate to almost zero from blowing sand. Other than that, the runway surface is remarkably smooth and plenty long. Once landed you are assigned a parking spot depending on whether you are camping or just dropping people off.

Once at our parking spot, we were greeted by the locals, briefed, and welcomed.

The first priority is to tie the plane down and tie it down well. The winds on the Playa can frequently exceed 40 knots. The second is to mummify parts of the plane to protect them from the superfine Playa dust. These parts include but are not limited to air intakes, landing gear struts, air data sensors and vents.

Once the plane was secure, it was time to pitch my tent and set up a base camp to explore the chemically primed planetoid.

After a couple of days living on a mad max movie set, it was time to head home. Before leaving Burning Man it is mandatory to undergo briefing, explaining the procedures for departure as well as the hazards associated with high-density-altitude operations and the Playa’s propensity for wind and apparitional sand storms. The serious nature of the briefing was fabulously contrasted by the attire of the briefer and recipients. The fashion was akin to the bar scene in Star Wars (for those that choose to attire themselves at all). I guess the lack of clothing was a gallant attempt at lowering the takeoff weight considering the density altitude – you just gotta love the diligence of pilots!